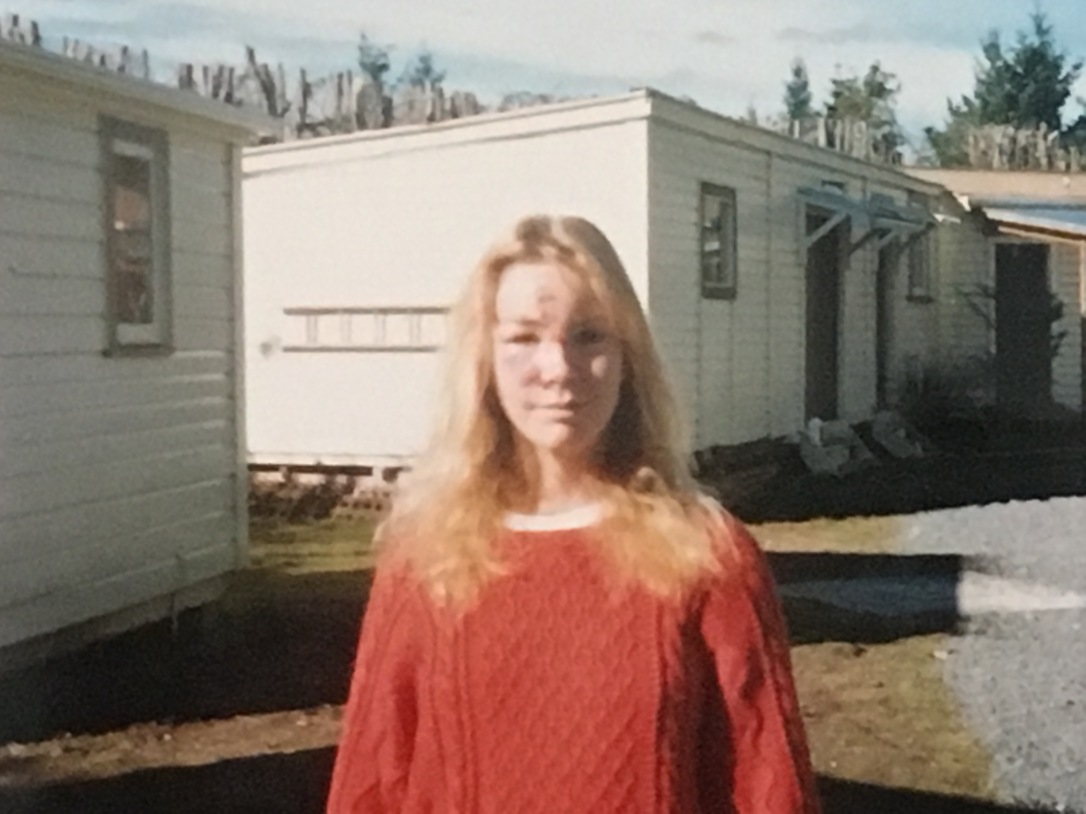 A month before my 16th birthday, on a school camp, I fell down a mountain.

The mountain I fell down was Mount Doom (alright, Mt. Ngauruhoe but following LOTR filming it’s always Mt. Doom to me). Technically, I started sliding down it on my bum first, but when the snow turned into boulders and I dug my feet in to try and slow down, I flipped, and smashed head first into the rocks. I split my face open – you could see my cheek bone through the hole in my face. I ended up with 11 stitches in my cheek, forehead, and temple – 4 fewer than the man in the hospital at the same time as me who had 15 stitches in the massive wound the rebounding chainsaw had left in his face.  I knew then that I was incredibly fortunate – I hadn’t broken any bones, I still had both eyes, and a helluva story to tell when I got back to school (and hadn’t had to deal with a chainsaw eating into my face).

What I didn’t anticipate is how much it would affect me afterwards. When my parents drove down to the national park to pick me up from hospital and camp the day after the accident, I had been with my friends and was feeling cheerful and happy, but on the drive back when we stopped for lunch I refused to get out of the car. I didn’t want anyone to look at me. Your face is so much a part of your identity that when it is misshapen by stitches and swelling and bruises, you feel monstrous. Especially at the age of 15. I was so worried that I’d still look bashed and broken by the time of the school ball and my 16th Birthday. My mother made me get out of the car that day and I’m happy she did. She taught me that strength came in all forms and sometimes you need to be brave so you can see that the stares you dread hold compassion, not disgust.

Everyone went on about how brave I was, how I walked down the mountain to the helicopter that arrived at the bottom, how I didn’t cry, how I laughed things off. That became so much the story that I believed it all. I didn’t know why for months after the accident I’d suddenly start choking and not being able to breathe in the middle of laughing, or talking, or why I only remembered part of what happened.

One night, I was lying in bed and couldn’t sleep. I was thinking about the accident and realised for the first time that there was a bit missing. I made myself think step by step through it. Suddenly I remembered the feeling of being out of control, the impact, the pain. Most importantly, I remembered the fear. It fell on me in a great cloud. I started sobbing and throwing up; a full blown panic attack. I remember racing down to my parents’ room and sitting on their bed for ages, crying, and repeating over and over again: ‘I was so scared’.

The brain puts off what it can’t deal with until later, when it thinks it has space. Unfortunately that doesn’t necessarily make it any easier.

I’ve gone back to Ngauruhoe twice since. The first time was a year later on another camp. I thought I’d be fine – we were walking up Ruapehu rather than scaling Ngauruhoe. But then my feet started slipping in the loose scoria – the same loose scoria that was still tattooing one of the scars on my face a pale blue. I wouldn’t have made it up the top of the ridge had not one of the boys in my group walked in front of me, wedging his big feet into the scoria to make dents and telling me to walk in his footsteps. Once at the top I went and sat by myself and cried. I didn’t really understand my reaction and was deeply conscious of the sideways glances of my peers.

I thought, after that, that I had conquered it.

16 years later I was back on the same school camp, this time as a teacher. A 10 weeks pregnant teacher. I didn’t have a panic attack this time and got up the ridge with no scoria to worry about. The view was incredible and I felt amazingly confident. Then we began walking across the saddle – this was pretty much all scoria and a steep slope. The teenagers loved it – they zoomed across. I felt the panic rising but was able to stop it through two things – a) I was a teacher. I had to stay in control, so I did. b) one of the adult helpers took my arm and walked slowly across with me, putting his body between me and the slope.

Conquering fear is not the removal of it, it is carrying on despite it. I was very proud of myself for conquering the mountain (or his friends) again.  The photos below are my pride pictures. I use them to remind myself of what I can do even when it seems impossible. 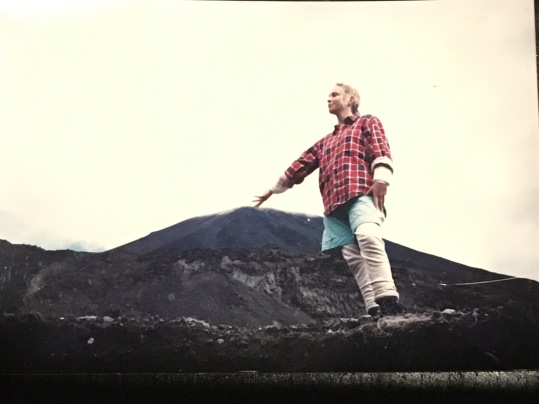 Return to Ngauruhoe as a Year 13 Student

Return to Ngauruhoe as a teacher

Fear is not just physical. I have a fear of vulnerability. It took me a while to figure this out. It’s been at the root of self-sabotage and avoidance for many years. It stems from relationships that didn’t go so well – why open yourself up if you’re going to be rejected and hurt?  One of the reasons it took me so long to see this about myself is that I can, at times, seem pretty fearless. I have no trouble speaking in front of large numbers of people. I make friends easily. I have been known to dance on tables. I teach teenagers. I confront grown up bullies in public. This all led to a narrative of confidence. I knew I had the odd self-esteem issue but, apart from a couple of dark times, I have always liked myself. I am an open person. I don’t mind sharing very personal and sometimes painful or embarrassing things. So this fear of vulnerability thing? It seemed to come from nowhere.

Once I realised what it was, and how it was stopping me from doing the things that I love, the things that bring me happiness, I took steps to change it. The first step was sending an email. Sounds pretty harmless but my heart was pounding in absolute fear while I wrote it and I awaited the reply in great trepidation. I was putting myself on the line – I asked a guy at work if his offer of gym training meant everyone or if I was too overweight and unfit to come along.  His reply changed me. He was so encouraging. The first time I went, I was so anxious. I was doing that nervous grin thing and my whole body felt like it was vibrating with fear.  I wasn’t afraid of the gym equipment or the exercises even – I had been a gym bunny at one point and felt confident I could pick it up again. I was afraid of exposing myself. My true self. Everyone there (all teachers, all colleagues, all lovely people) was so supportive and positive. My old muscle memory started coming back, as did my inner strength.

I went home from that first gym session and wrote several thousand words – something I had been avoiding for months.

The six months that followed felt like I was bringing myself back from somewhere lost and muffled. I lost weight, gained health, started gaining confidence. I joined in the staff volleyball tournament and didn’t mind when I took a big fall – I just rolled and stood up with a flourish to applause.  I had opened myself up to be incredibly vulnerable. I stopped pretending I was okay, and through that I became more okay than I had been in a long time.  The photo below, for me, captured the change I felt in myself after facing my fear of vulnerability and beating it back. 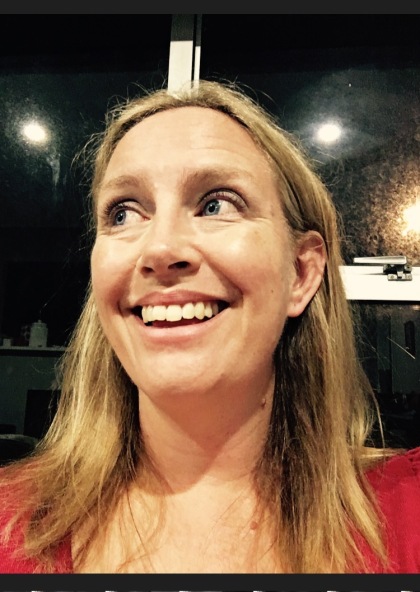 The fear still surfaces. Like I said – conquering it doesn’t mean it goes away, it just means we do what we want to, or need to, regardless. And if we fall back into default bad habits, well, we know what to do and we know that the fear can be beaten back.This, for me, is important that we see reflected back in fiction, in real life discussions, in our world. Strong people can be frightened. Confident people can be vulnerable.  And, as in life, it is often people’s friends and families who help them face the fear.

I don’t know if I could have done what I did without the support and kindness of others. They helped me face my fears, and by doing so they helped me become more truly myself.

5 thoughts on “Facing Fear, Acknowledging it, Beating it.”