The beauty of romance is that while you know what the ending will be, it’s the journey that matters. This means that the tropes in romance can be reworked and merged and used again and again and it doesn’t have to detract from the story – sometimes it enhances it.  So what are a few of my favourite romantic journeys?

The love triangle is a bit of a staple in some genres, and it’s one I confess I find both exciting and frustrating. I prefer to not be constantly thinking the heroine has chosen the wrong person, and my innate loyalty means I dislike playing people off each other. That said, one of my favourite romances of all time is Bath Tangle by Georgette Heyer. The total mess everyone ends up in is entertaining mostly because you know right from the beginning who will end up with whom. Shakespeare’s Twelfth Night is another such romp. Not so much a love triangle as a love jigsaw puzzle.  Viola’s unrequited love for Orsino struck a chord with me and I relished my performance of her speech to Olivia where she says she would ‘build a willow cabin at your gate’. It is both comical and tragic, but you know from the beginning that she will end up with Orsino. And therein lay its appeal to me. I like to know I’m in for a happy ending.

A problem I have with some love triangles is that it becomes less about the choice a woman has to make and more about the competition between the men. Patricia Briggs manages to avoid this in the Mercy Thompson novels because it is written from Mercy’s point of view and she openly articulates her discomfort with the thought that they are competing over her. Even with the fact that they are both dominant werewolves and that this can give an excuse to a writer to allow the predatory and hyper competitive drive to be normalised, both Adam and Samuel recognise Mercy’s strength and autonomy, and her right to make her own decisions. This makes them both much more attractive and makes her decision (and our own!) much harder.

Another romantic trope I really respond to is the friends to lovers. Usually this is a result of one of the couple having an unrequited love for the other. Now, I’m not a big one for unrequited love in real life, but I love it in fiction because I know it’s going to be requited by the end. I can allow my heart to yearn and angst without any fear it isn’t going to all be okay by the time I turn the last page.

Enemies to lovers I think is so perennial because it allows for so much conflict and so many obstacles to be thrown in the way. It makes the falling in love of our heroes almost destiny as they fall for each other almost despite their will. 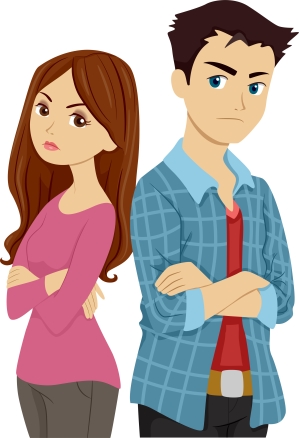 Pride and Prejudice is what you could call the patron saint of this trope. We love Mr Darcy almost totally because he falls for Elizabeth despite his assessment of her and her family as beneath him. Enemies to lovers also covers a side trope of “Allergic to Love”. Shakespeare’s Much ado about Nothing is a good example of this. While Beatrice and Benedick are enemies more of the state of marriage than each other, their reluctance and sniping at each other makes their eventual capitulation to love more delightful. The movie Hitch is great modern example – Hitch wants to avoid falling in love because he no longer believes in it. The obstacles that arise to firstly, keep him from falling in love, and secondly, keep him from attaining the love he finally feels, is what provides the driving conflict and humour in this story.

When Harry met Sally covers both of these tropes. Although strictly you could say it’s enemies to friends to lovers to enemies to lovers. It was one of the first times I remember seeing what resonated with me as a ‘real’ relationship on screen. The authenticity of their relationship was built on the length of time the story covered. We were shown the development of their relationship – first as a friendship and then as they negotiated the tricky steps of becoming lovers.  You’ve got Mail is also a mix of the two. While online they are friends with the possibility of something more, in real life they are enemies. The complexities of this situation once Joe discovers Shopgirl’s real identity make the end romance so much more meaningful.

Opposites attract is also a great trope. It’s a perennial in the teen movie where the jock falls for the nerdy or outcast girl who then magically becomes popular and beautiful. But it was done particularly nicely in French Kiss (yes, I do love my Meg Ryan movies, fight me lol). They started out as superficially complete opposites, and what made it more real for me is that they stayed that way. Sure, Kate loosened up a little but she remained herself. In fact, she became more herself. Luc also remained, at heart, completely himself. Opposites didn’t just attract, they kept attracting.

In Redemption, Jelena and Daegal are seemingly complete opposites, in social class and in temperament.

Jelena was trying to be light but a pain inside her caught sharply, as it had done since Enstam, on the thought of her friends in danger. She risked another glance at Daegal. His eyes were so tender and kind she felt like crying. He put his hand on hers under the table and gave it a gentle squeeze.

‘Poor Jelena. It’s ok to be sad and afraid you know. You can’t be the hero all the time.’

She looked at him a moment longer, and felt her heartbeat quicken. She’d never noticed before how green his eyes were, or how strong his jawline. His hand was warm and strong and she wondered all at once what it would be like to be held by him. To let someone else be stronger. She had wondered that long ago with Anton but after a few brief fumbles in the dark they had quickly decided they were better as friends.

It was different with Daegal.

She understood Anton. She didn’t understand Daegal; his humour, his dauntless cheer, his seeming care for her all filled her with confusion. He smiled uncertainly at her and she realised she’d been staring. Panic filled her and she stood abruptly, disentangling her treacherous fingers from Daegal’s hand.

Love facing insurmountable obstacles is also one of my favourite tropes. We know they are destined for each other but there are seemingly too many things getting in the way, whether it is external or internal conflict and pain.

What are your favourite romantic tropes? Which ones can you not stand? Let me know in the comments 🙂