Today’s Tuesday Trying was inspired by a Twitter conversation. If you’re on twitter you might have seen an exchange between a woman who claimed that the Megalodon was still in existence and a whole bunch of marine scientists who said ‘uhh…not so much’. What hooked me was her claim that the existence of the Megalodon was known but hushed up because otherwise the government would experiment on them ‘just like the mermaids’.

I then had this conversation with some other people on twitter: 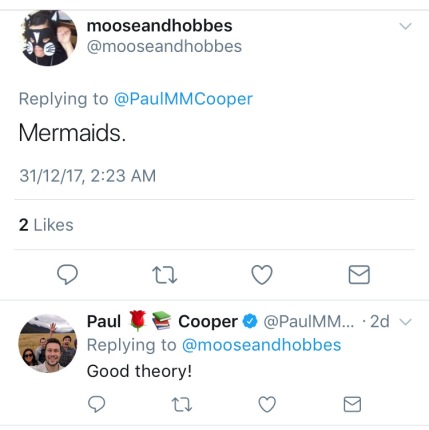 I then knew I wanted to write about it 🙂 So here goes, the beginning of a little mermaid adventure for your Tuesday, a little different from above but then that’s what we do with inspiration! Hope you enjoy.

Dappled light reflecting off the plexiglass warped the soldier’s face a little but Cas could tell it was him. No-one else stared quite so long at the deeps.

She cocked her head on one side, her tail slowing its movements so she floated, rocked only by the current. Brushing aside the tiny fish that wouldn’t leave her alone, she fought down a rising excitement. Maybe this one would be different. It had been several moon cycles since he and his crew had been taken and most of them disappeared but this one, Nathan, came out to the viewing grounds whenever he wasn’t training.

Her gills flared as the water churned behind her. Mryndir. Her mate came close behind her, his tail curling around hers. She smiled and leaned back into him, her eyes fixed on the human. Myrndir’s voice sounded in her head, the deep tones filling her heart as well as her mind.

Do you really think he’s the one to help us?

She reached out her arm and pulled Mryndir’s around her.

I do. Shodica says he is the strongest of the new recruits and that he is smart. But more than that.

She turned within his embrace, breaking her gaze from the human whose eyes pierced the deep.

There was an incident. In the laboratory.

Myrndir frowned and she stroked hair off his face where it tangled with his beard. The flashed images she received from him before they cut off abruptly ripped into her heart and she bent her head until it rested on his chest.

I heard. One of the maids tried to free her youngling.

His grief shuddered through his body and her arms tightened around him. He carried such a burden. She wished he’d let her share it. She turned her head, her eyes going to the dome. Nathan had gone and the platform was empty under the thick glass.

What does this have to do with the human. The one you watch?

Shodica said he picked Silvian up when they beat her down. He tried to protect her. And when they ripped her amulet off and left her drowning in air he stayed by her side to hold her as she died.

Myrndir turned to look at the dome and amongst the maelstrom of grief and rage flooding from his mind to hers, she sensed a flicker of hope. She held him closer, her tail wrapped around his, as if with her very self she could buffet the tides that were coming.

The water was so dark it appeared black at first. But Nathan had found that if you just stood a little longer, looked a little harder, you saw a multitude of varying shades. Light filtered in to the deep, even here. He rubbed his hand over his chin, consciously releasing his clenching jaw. The tension still ran through him though, pulling the muscles in his back into constant tightness.

Something out in the dark waters glittered and his eyes narrowed. They were always there. Watching them. An unexpected smile tugged at his lips. As if he wasn’t watching them back.

His hand went to his pocket. The amulet had been discarded after the mermaid died. Just left there, like rubbish. He’d wondered about putting it with her body but something stopped him. He’d tucked it into the side pocket on his trousers before the Commander or Doctor McLeod could see and that’s where it had stayed. Ridiculous really; it wouldn’t do him any good. But it felt wrong to leave it there.

He remembered the mermaid’s eyes more than anything. Fixed on his as she gasped lungfuls of the air that would kill her while her child screamed from the lab table.

He shook his head. Time to go. The meal would be over soon and then it would be back into that grey tiny cell to be alone with his thoughts. His eyes closed and his chest hurt. Light. He remembered the light still. Not this fake green white glow but the warmth of sunshine. The coloured twinkle of fairy lights around Sarah’s windows.

The thought of her made his heart bleed but he refused to stop thinking about her. Relished the pain. While the pain lasted she was there with him. He blinked rapidly. She probably thought him dead.

He took a last look at the deep and turned back to the compound beyond the platform. Better dead than here. Well, clearly he didn’t really think that or he, like Mark and Joel, would have ‘disappeared’ too.

Life was worth fighting for. Hope. His lip curled and he slammed the pad by the door so hard he had to pull back and do it again, more gently. It beeped in rebuke and then buzzed the door open.

Hope. Like that could exist in this hell under water.